The toughest part of the Juno beach landing. Although being a little harbor, it was very well defended. After fighting their way off the beach, the progression will continue into street fightings. Discover the remains of the German strongpoint WN 31, one of the most powerful in the Juno area. Today many bunkers remain as well as a Sherman Duplex Drive and a Churchill « Petard » tank, one of the « funnies » used by the British armoured units can be seen behind the dunes and remains as a monument. On D-Day, it fell into a 12 feet deep crater thus filling the hole and permitted, thanks to its « sacrifice », other vehicules to push inland. 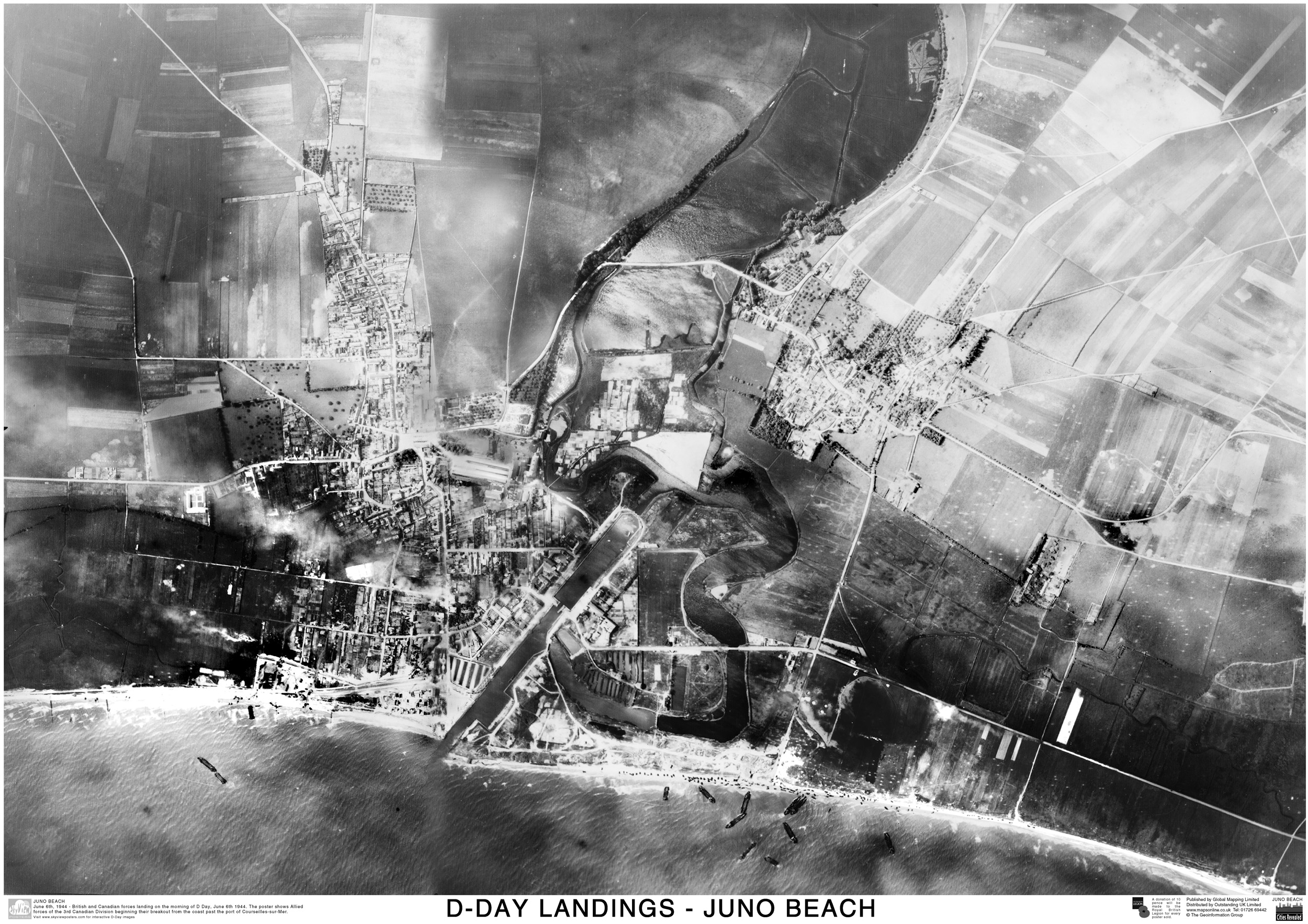 Inaugurated in 2003 at the initiative of Garth Webb, a Canadian veteran who landed on Juno the 6th of June. This very good museum is the only one in Europe dealing with the role of the Canadians in the 2nd World War, and of course their D-Day. A very interesting collection of documents, maps, photos that show the immense effort done by this nation and its citizen to help turning the tide of this war. A short movie was released recently on display in the museum and is worth seeing.

More or less in the middle of Juno beach, the Queen’s own rifle of Canada Regiment landed there at 8.05 am and was welcomed by a hail of bullets and mortar shells which inflicted around 80 casualties in less than 15 minutes to the assaillants. We will see how and unfortunately why the soldiers of the first wave arrived right in the middle of the strong point WN 28 which made this particular part of the beach a vast killing zone. Several bunkers and pillboxes can still be seen today and make us understand the nightmare of the landing’s first instant.

This is one of the two Canadian cemeteries established in the Lower Normandy Region. 2048 soldiers repose forever in the land they helped to liberate. A striking view of headstones all lined up and many flowers in between give the visitor a feeling of respect and serenity. A lone cross marks the grave of a French man willing to fight with his cousins from Quebec. Yes, in this graveyard, all of them were volunteers.

The « start line », where the 9th brigade resumed the advance stopped the night before. Fearing a possible German counter attack, orders had been given when night fell to consolidate the positions. Nothing came so the liberators were on their way towards their D-Day objective: Carpiquet airfield and the village ! The advance went well until a formidable German counter attack pushed the Canadians back to the village they left in the morning, which soon after will become « hell’s corner ».

The villages where the fanatic young soldiers of the 12th SS brutally fought back the Canadians, isolating and decimating at least two companies. Retaken by the Germans, they will establish perfect defensive positions on those two villages and the surrounding ones, creating the toughest stronghold defending the city of Caen. Defended to the last man, it is not before the 8th of July, and terrible losses on both sides, that the Canadians will conquer the ruins of what used to be normal Normand villages.

An old medieval abbaye and farm buildings partly belonging to the Vico family, greatly involved in the French Resistance. On the 7th of June, Kurt « Panzer » Meyer, commander of the 25th SS Grenadier Regiment established his HQ in the abbey and used the towers as an observation post. From there he could see everything around, miles away, up to the coast and quickly organised the very successful SS counter attack. It is also a place where some eighteen captured canadians soldiers had been executed by SS criminals ; one can visit today the « Canadian garden », the place where they had been buried.

A magnificient medieval Normand village at the boundary of the Canadian and British sectors. In the afternoon of the 6th of June, troops from Gold and Juno beaches will make their inland junction. Here we’ll see, from the outside, the Chateau de Creullet, which became Field Marshall Bernard Law Montgomery’s Head Quarters between the 8th to the 22nd of June 1944. It is interesting to know that all the decisions regarding the American, British and Canadian ground units were taken from this place, Montgomery being the commander of all ground forces in Normandy until the 1st of august. Some very famous visitors came to pay a visit to « Monty », such as Winston Churchill, General de Gaulle and his Majesty Georges VI.

The easternmost sector of Juno, stormed by the North Shore Regiment (New Brunswick) and the 45th Royal Marine commandos. The stiff German resistance inflicted serious casualties, especially to the « Royal Marines », as can testify the 200 or so 50mm shells casing discovered around one of the German bunker. The losses suffered there mainly prevented the Canadian bridghead to be linked up with Sword beach.

A stop can be made in front of the Radar station of Douvres la Délivrande. A massive complex of more than 30 underground bunkers, concrete gun pits, linked up by trenches, surounded by antitank ditch and minefields held by 230 German troops. This was a German military position which task was to spot any incoming ennemy aircraft or warships. Although bombed and destroyed before D-Day, this huge strongpoint will resist until the 17th of June… being like a thorn in the flesh of the Allies, as well as the main objective of every attempts of German conter attacks.

We’ll make a quick stop at the small monument of one of the 49 airfields built by the Allies between the 7th of June to the end of August. The ALG’s (Advanced Landing Ground) were built for the permanent stay, very close to the front, of « fighter wings » (comprising three allies fighter squadrons) in Normandy. The ALG codenamed B-4 was used by the RCAF’s 401st , 411th and 412th fighter squadrons, entirely composed of Canadian fighter pilots commanded by the highest top score ace of the RAF, The British Wing Commander Johnny Johnson. 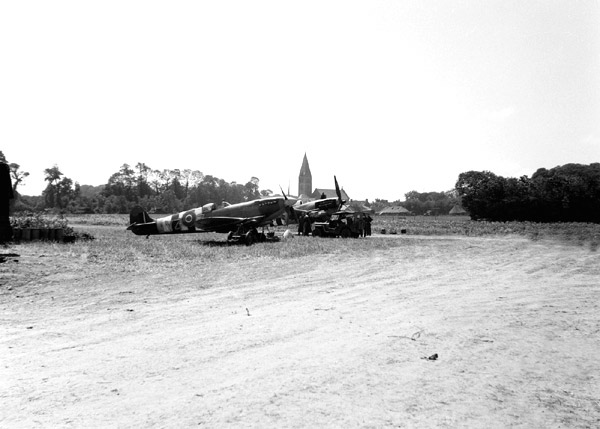 Windsor operation was organised in order to get the key positions the west of Caen, and then pursue to the center of the city. See the start line of the canadians regiments which had to capture the village of Carpiquet itself, the north and south hangars of the airfield and discover what was going to be one of the most frightful frontal attack on a coverless terrain. The soldiers had been under artillery shelling hours before the attack that started on the 4th of July and then again, faced the terrible fanatism of the very young SS soldiers. 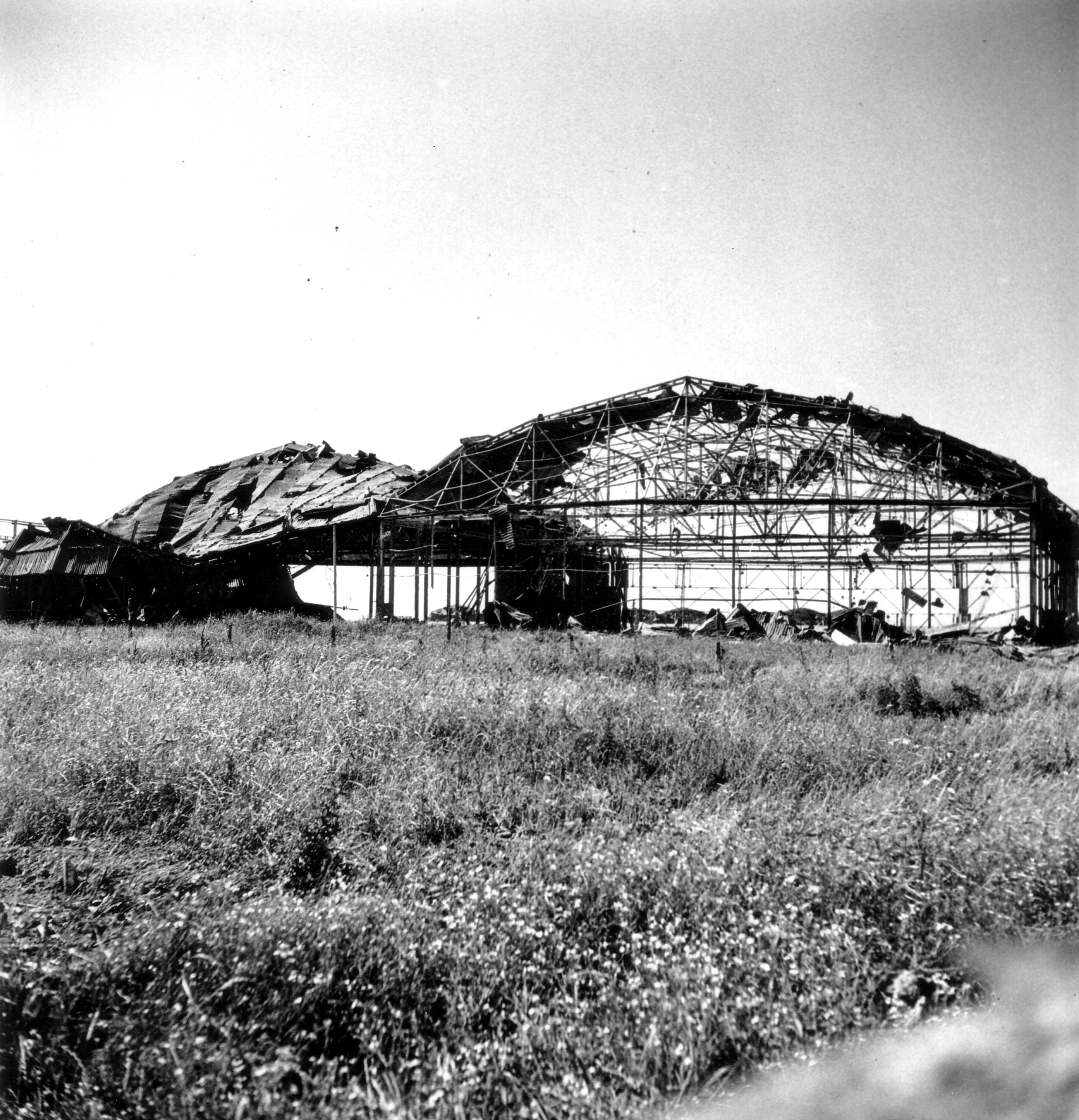 615 men buried, most of them being part of the 1st (free) Polish armoured division, commanded by General Maczek, attached to the 1st Canadian army. Almost all these soldiers died between the 7th of august (unit’s first engagement against the German army) until the end of the month. The very high number of Polish soldiers killed during those days depict the almost fanatical motivation to seek revenge from the Nazi agression over Poland, the atrocities and occupation that followed in september 1939. Closing the Falaise Gap, the struggle of the Poles here will remain as one of the fiercest of the whole Normandy campaign.

Drive through the historical medieval town of Robert le Magnifique/the Magnificient, father of William the Conqueror, fiercly defended by the very young and fanatized infantrymen of the sadly famous 12th SS Armoured Division « Hitler Jugend ». Although the town was badly bombed and destroyed, one can still see the Chateau, churches and old parts of the town like this was before the war. 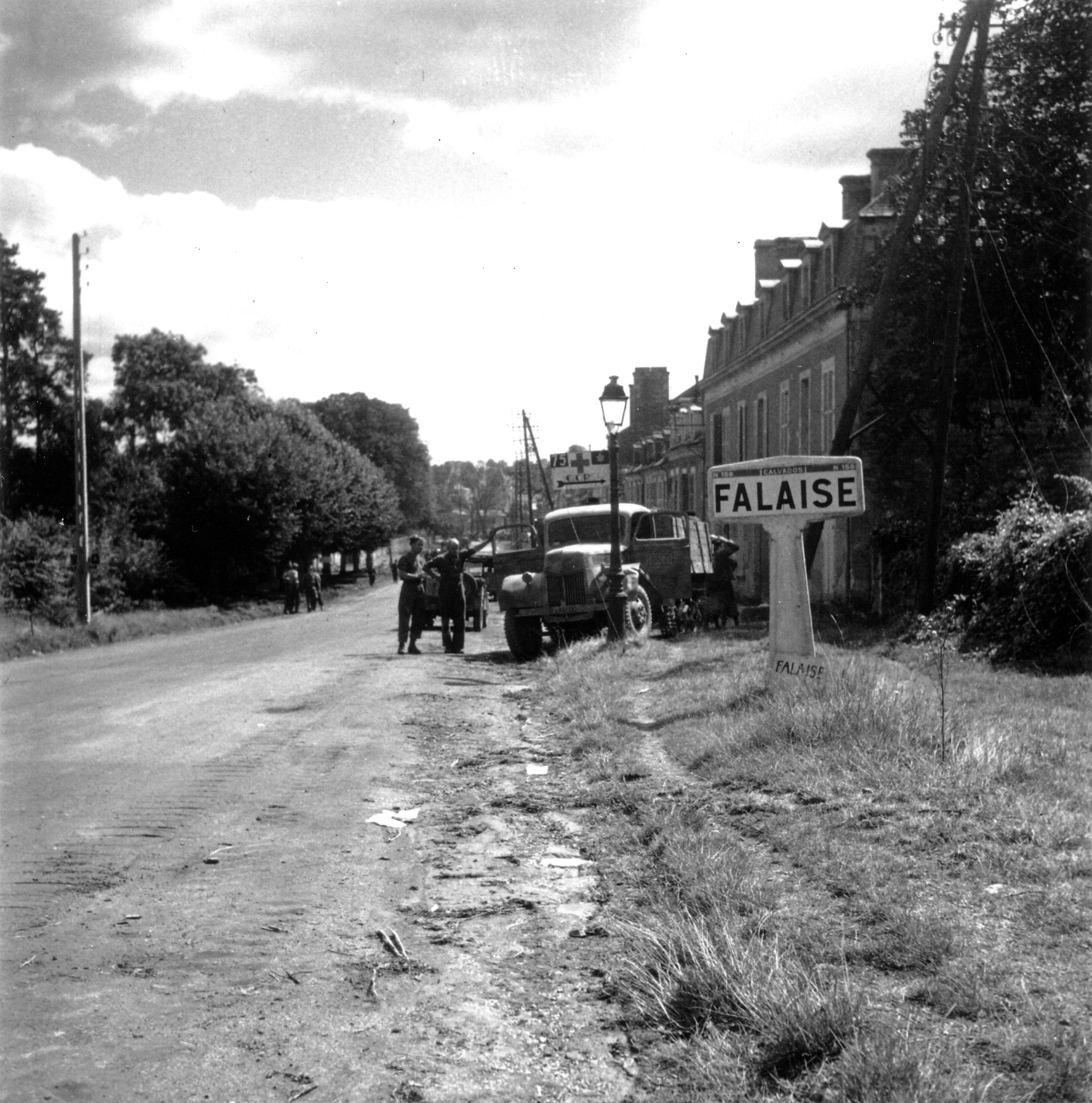 Discover the village that was held and defended without respite for 2 days by Major David Currie, who organised his combat group made of tanks, half track, anti tank guns, infantry and artillery forward observers to resist the fierce German counter attacks, trying to keep the gap opened. Completely outnumbered by thousands of desperate German troops, Currie organised perfectly his small task force and while keeping the lock closed, inflicted numerous casualties to the ennemy. For his intrepid action, coolness and great leadership, he will be awarded the Victoria Cross – the only one awarded to a Canadian soldier in the campaign of Normandy. 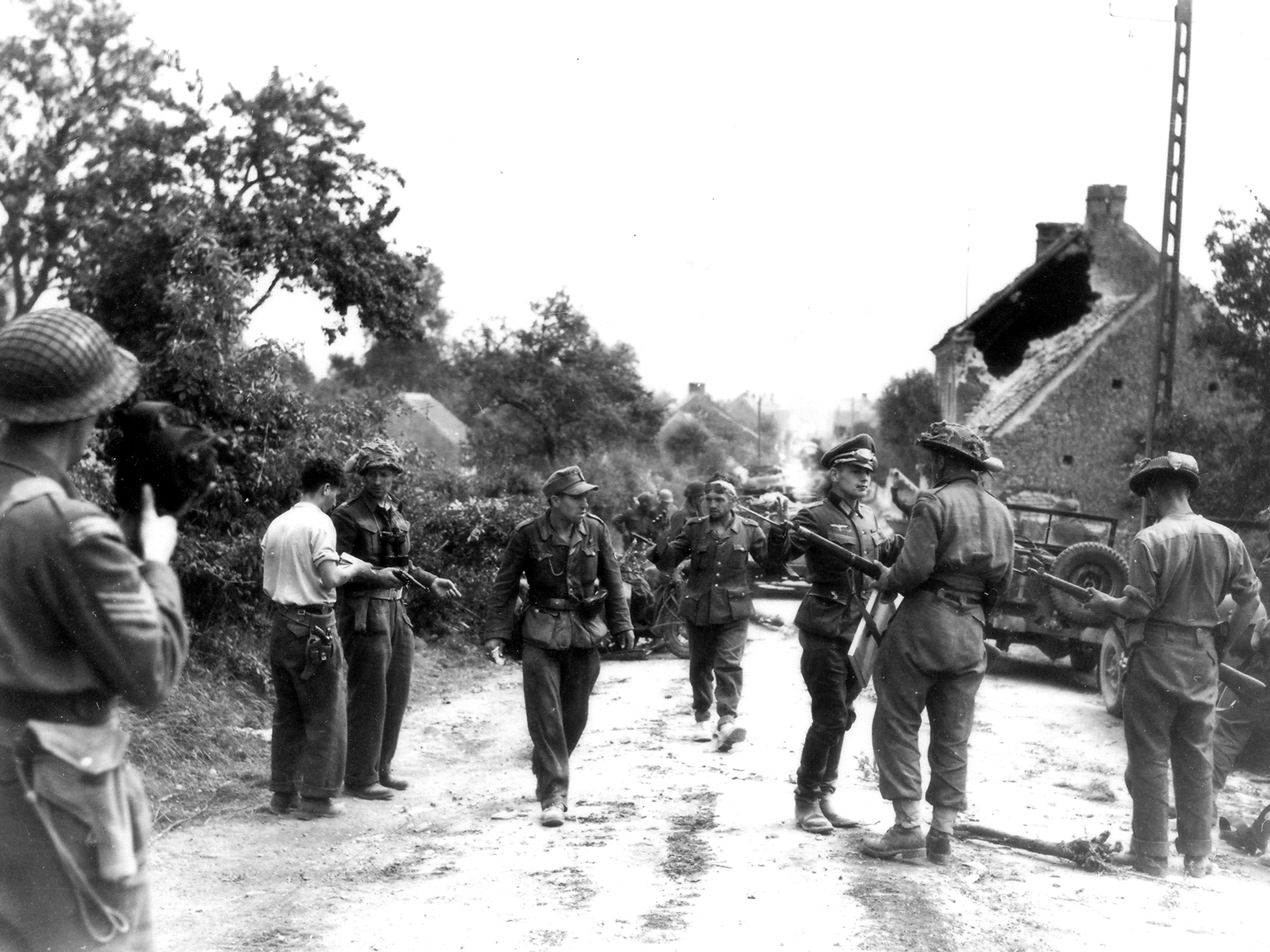 One of the only escape routes for the 100 000 Germans trapped in the gap. Hear the story of the father Launay, who organised shelters in basements for the inhabitants of the village, and then negociated the surrender of the hopeless German army. When the Germans realised this was it, around 40 000 soldiers were captured in the whole perimeter, among them more than 2000 in front of the ruins of the church to… him and one Canadian soldier.

The village where was put to an end the Battle of Normandy on the 21st of August 1944. On the main crossroad Polish, Canadians, Americans and Free French troops, coming from four opposite directions, encountered ; thus the pocket in which the German army had been encircled was definitely closed.

Visit the memorial and museum which bring you into the details of the formation of the gap and make you understand clearly the last moments of the Battle of Normandy. A big 3D map shows us how the different allied forces gathered progressively and were able to almost completely surround the retreating germans. The Allies pushed inexorably until the German had no other option than to evacuate through a tiny corridor (2 miles wide) which soon became the « corridor of death ». You’ll then enter a veranda that provides you a unique 180° view of the battlefield, 262 meters high (800 feet). Explanations are given by the memorial’s guides and a short film ends the visit.

If you like or just even heard about the German engineery and their vehicules, such as the « Panzer » (which means « armour » in German), then you will certainly like this: the only Tiger tank in the region of Normandy ! One out of the two of this sort in France ! Abandonned during the mad dash for the Seine river because of lack of fuel, the tank was even sabotaged by its crew before escaping. 57 tons of steel and equipement, a 100 mm frontal armour, an extremely powerful 88mm barrel which outclassed all the equivalent type of armament used by all belligerents during the war. This is simply the best tank of World War 2 ! 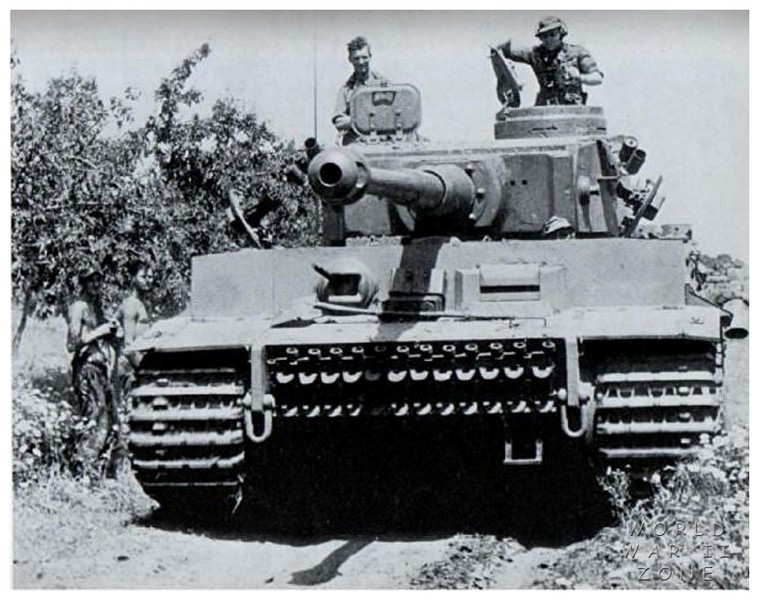 The tour will bring you to the exact location where Field Marshall Erwin Rommel, aka the « Desert fox » and Montgomery’s best ennemy, was almost mortally wounded by RAF’s fighter aircrafts on the 17th of July. His injuries were so severe that after a period of coma, he will be transfered to Germany and have several brain surgeries which will be in the end successfull. He will not survive too long anyway: being part of the plot which tried to assassinate Adolf Hitler, he was obliged to comit suicide. He remained as one of the most brilliant German officer in WW2, the « baby Marshall » (he was by then the youngest field marshall in the whole German army) and certainly the most respected German soldier by the Allies.

The biggest of the two Canadian cemeteries of Normandy: 2958 graves. Most of those soldiers perished during the 2nd half of the Normandy battle, during operations Windsor, Tractable, Totalize and the Falaise Gap. An impressive place which shows the heavy price paid by the Canadian army in the Normandy campaign.